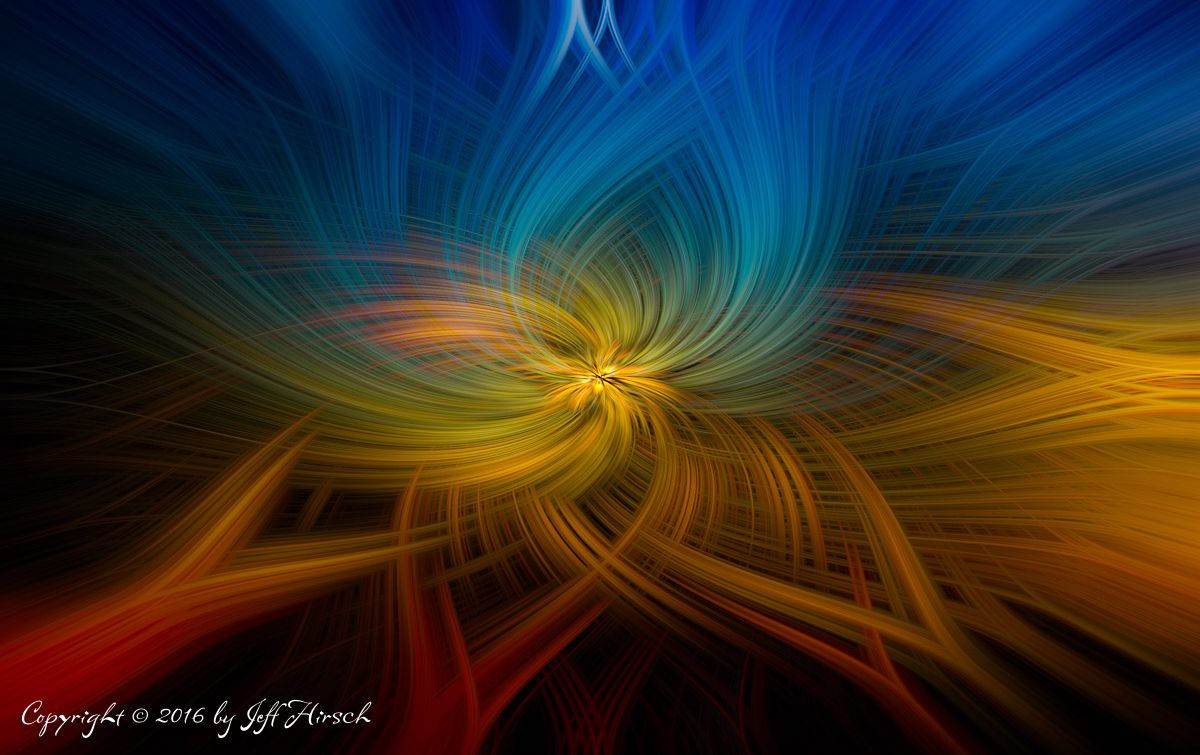 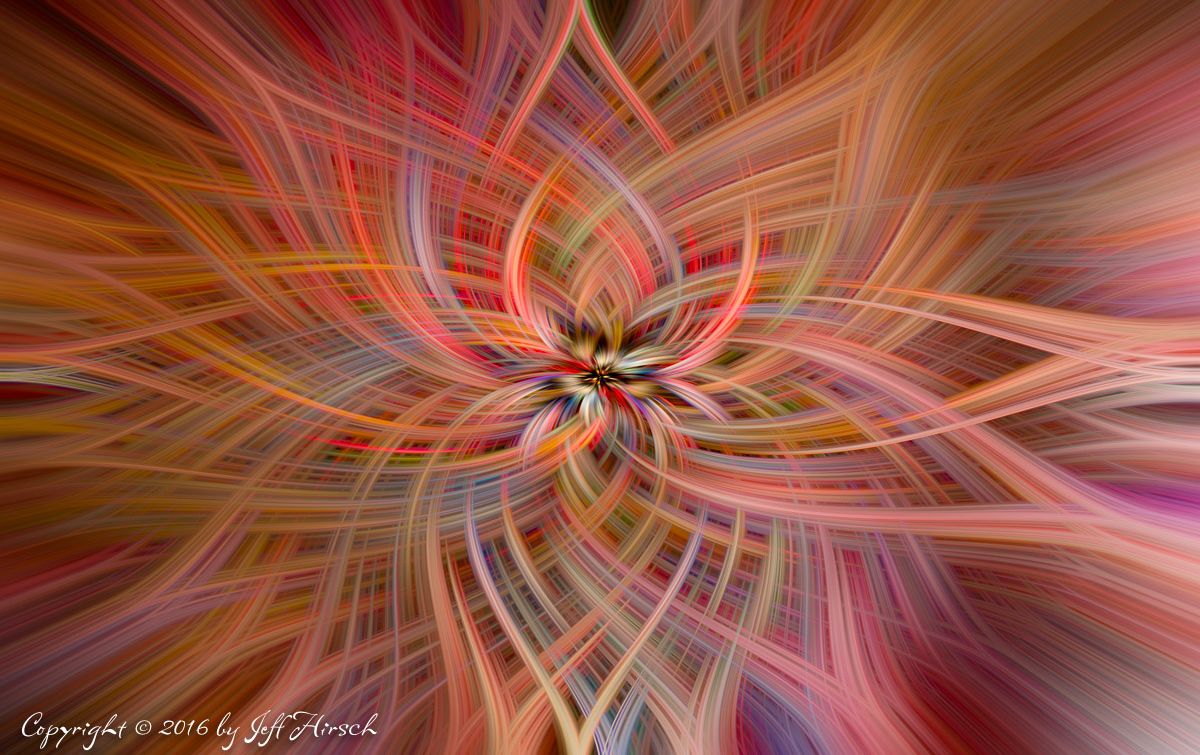 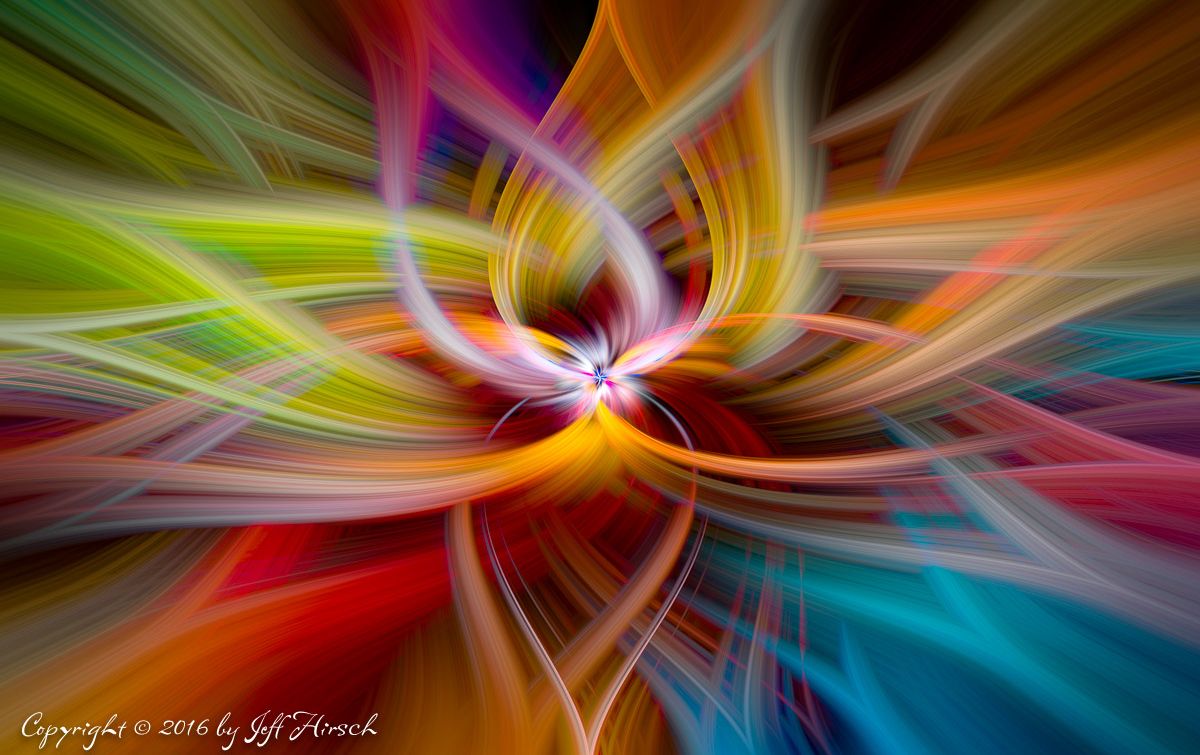 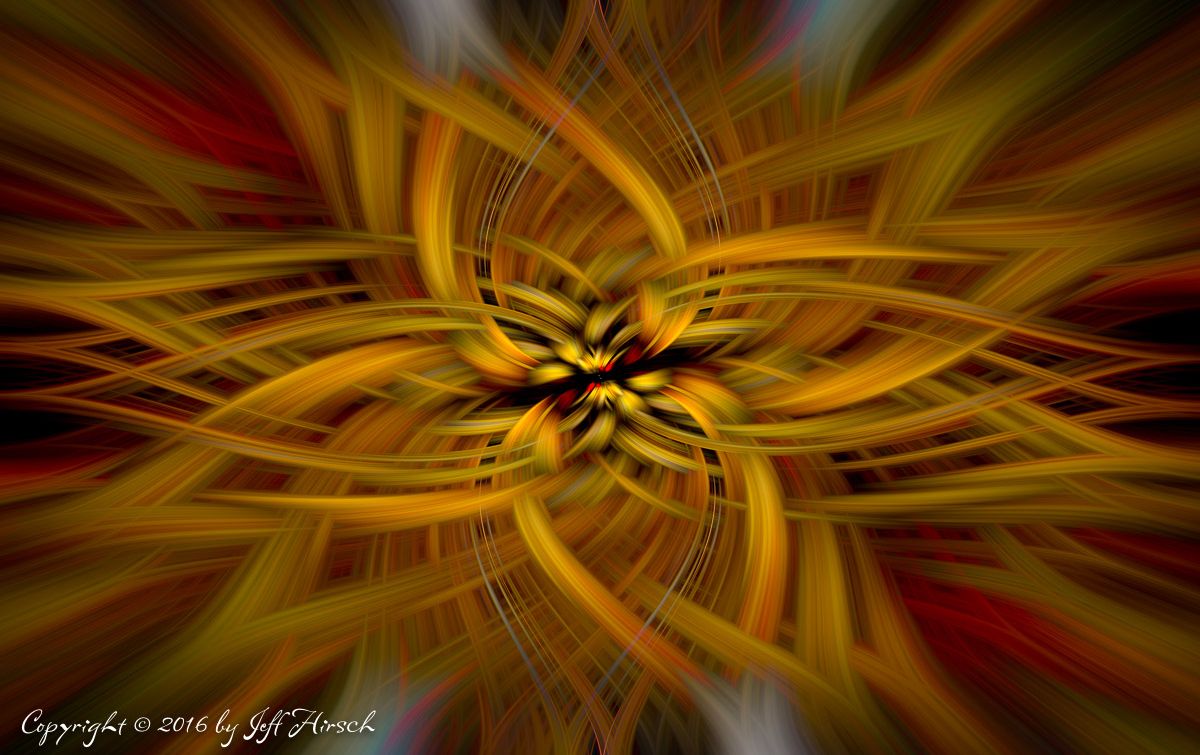 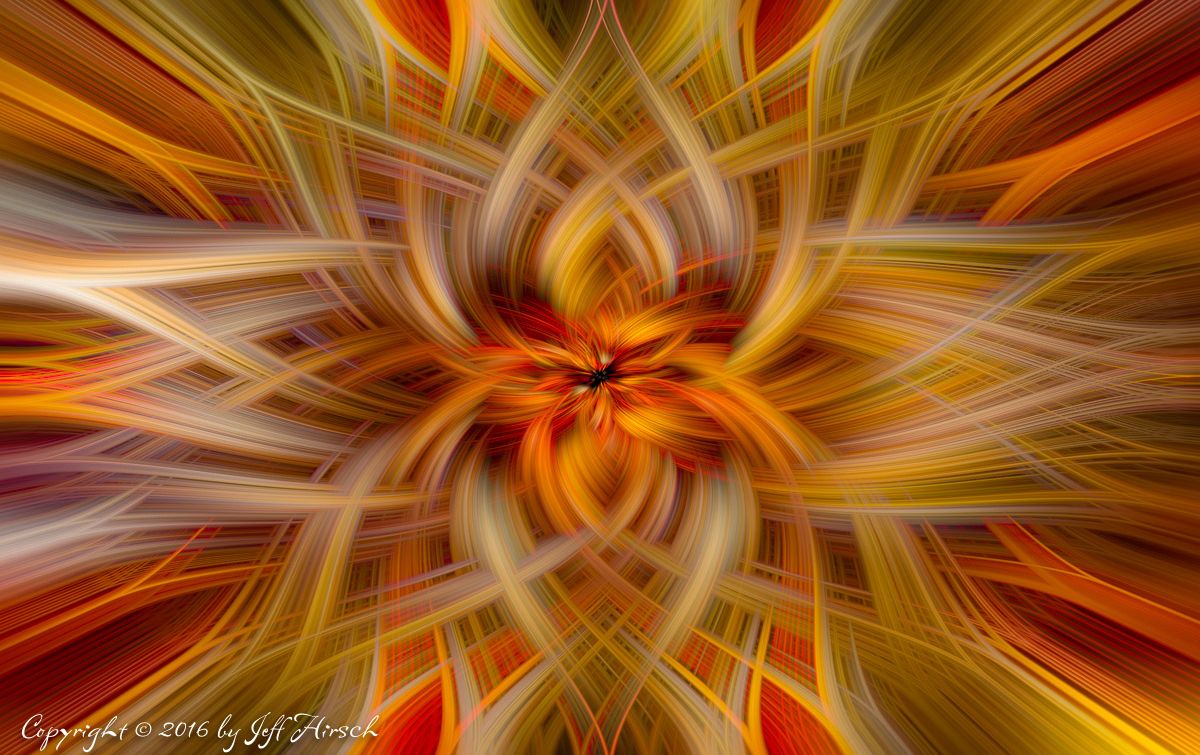 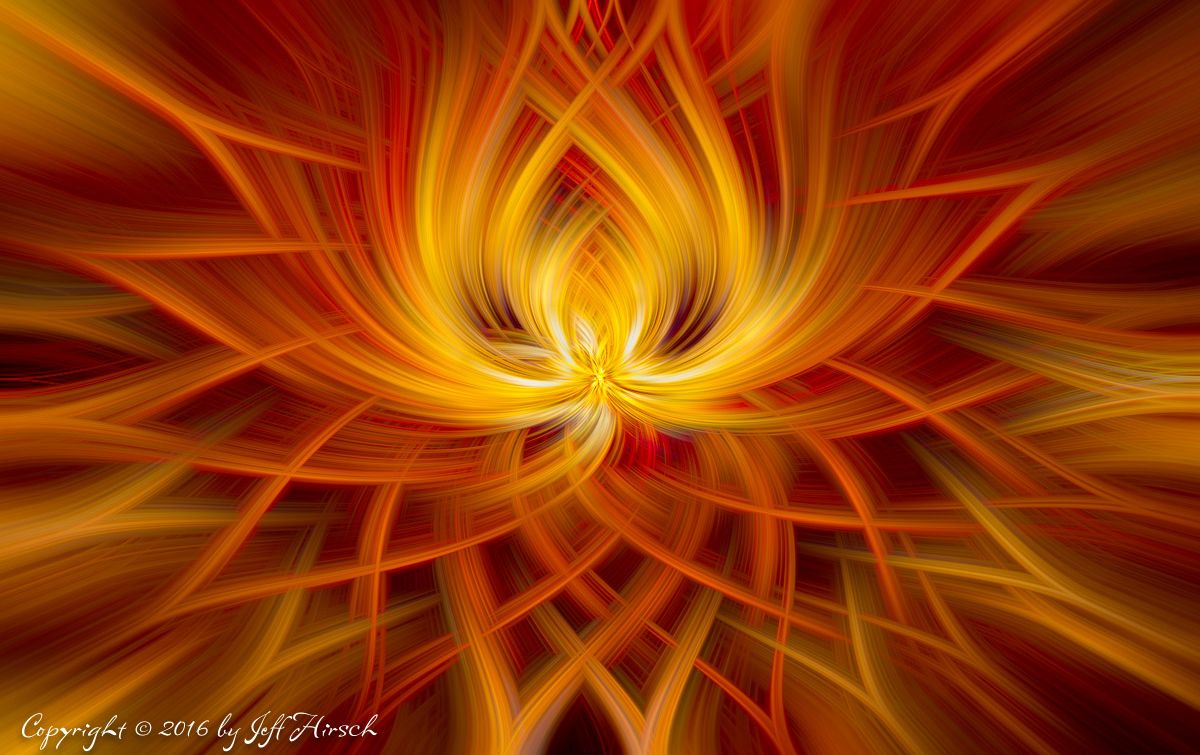 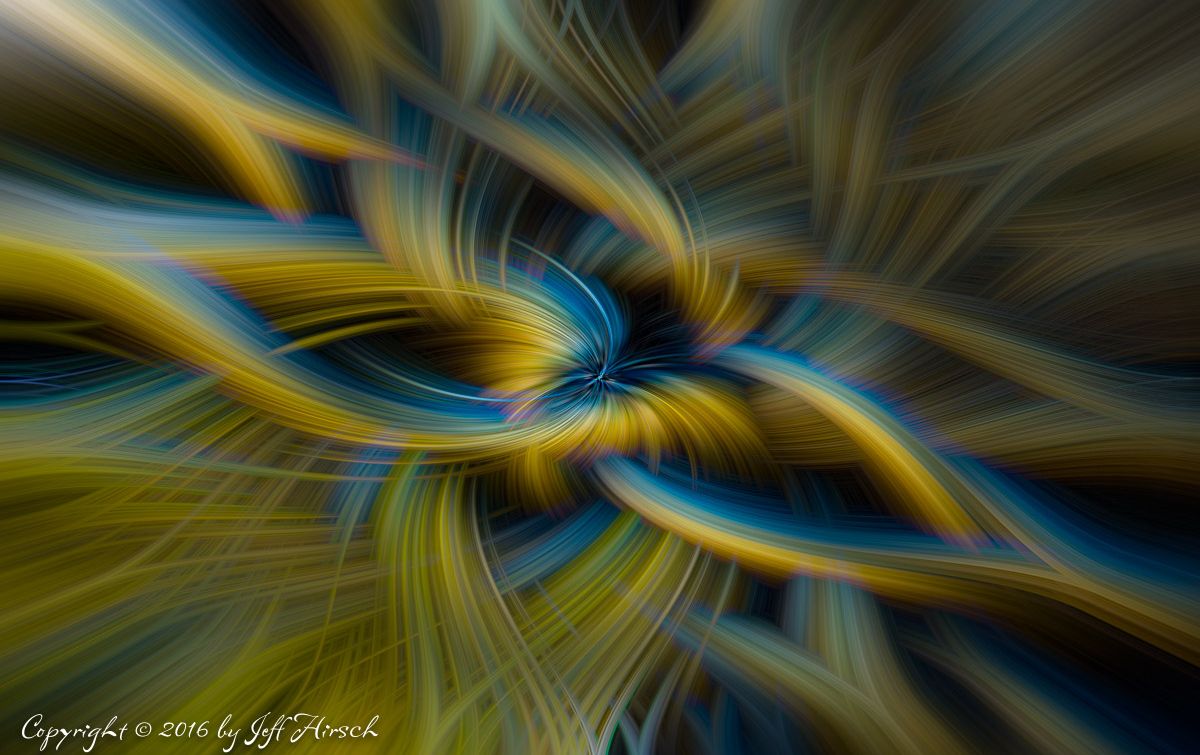 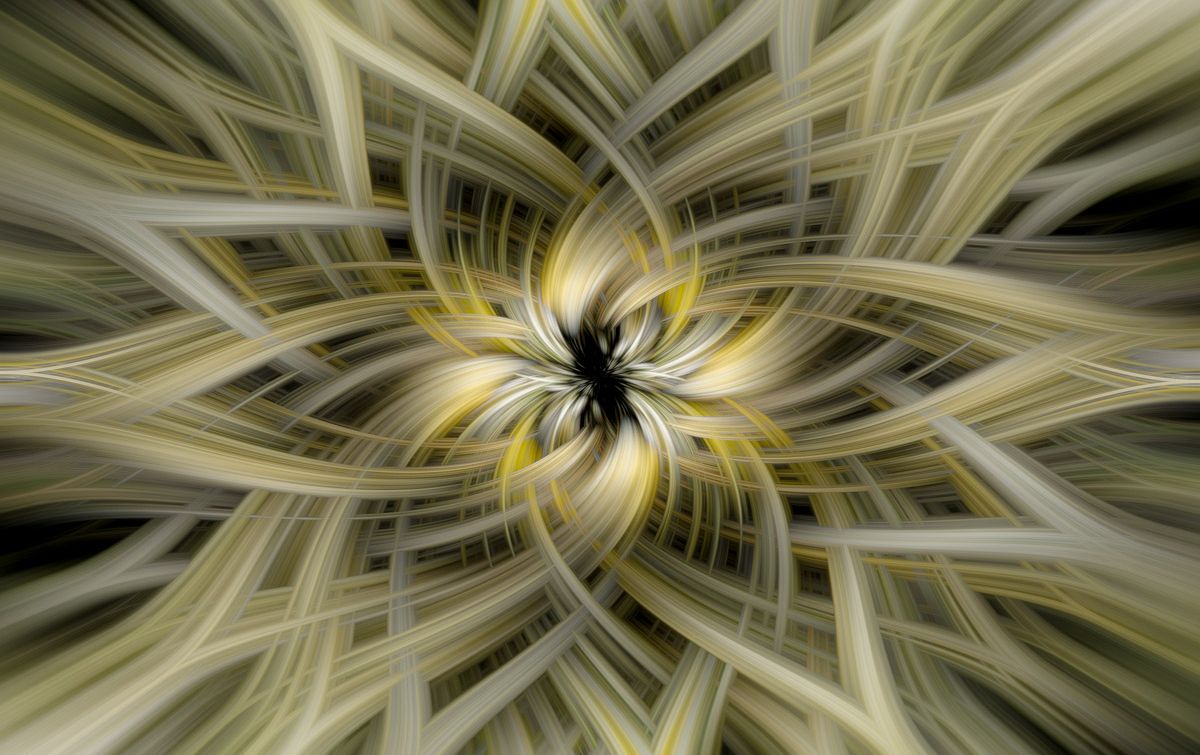 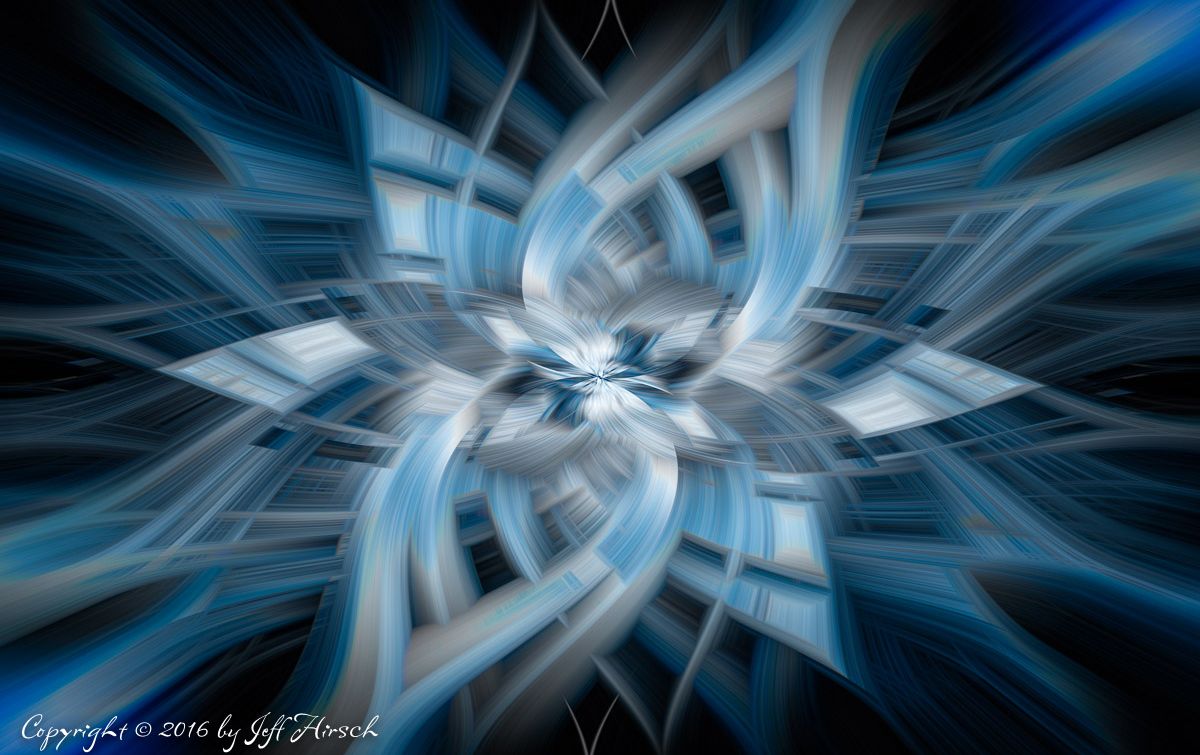 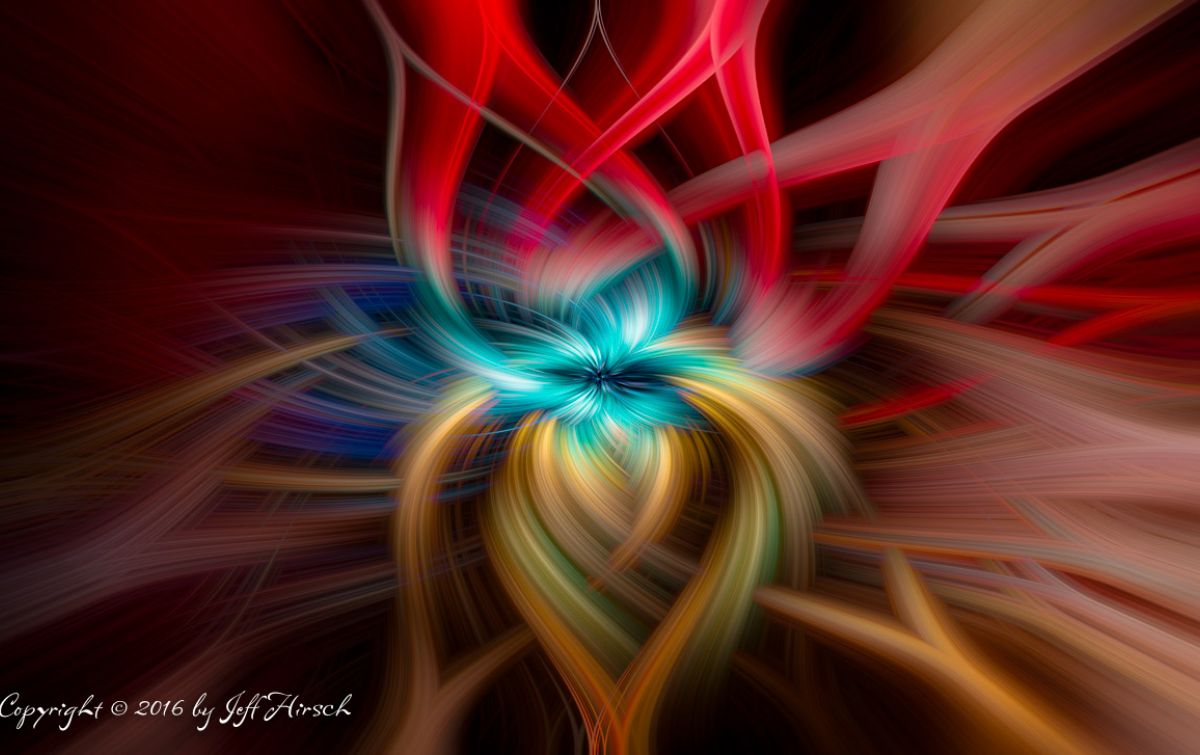 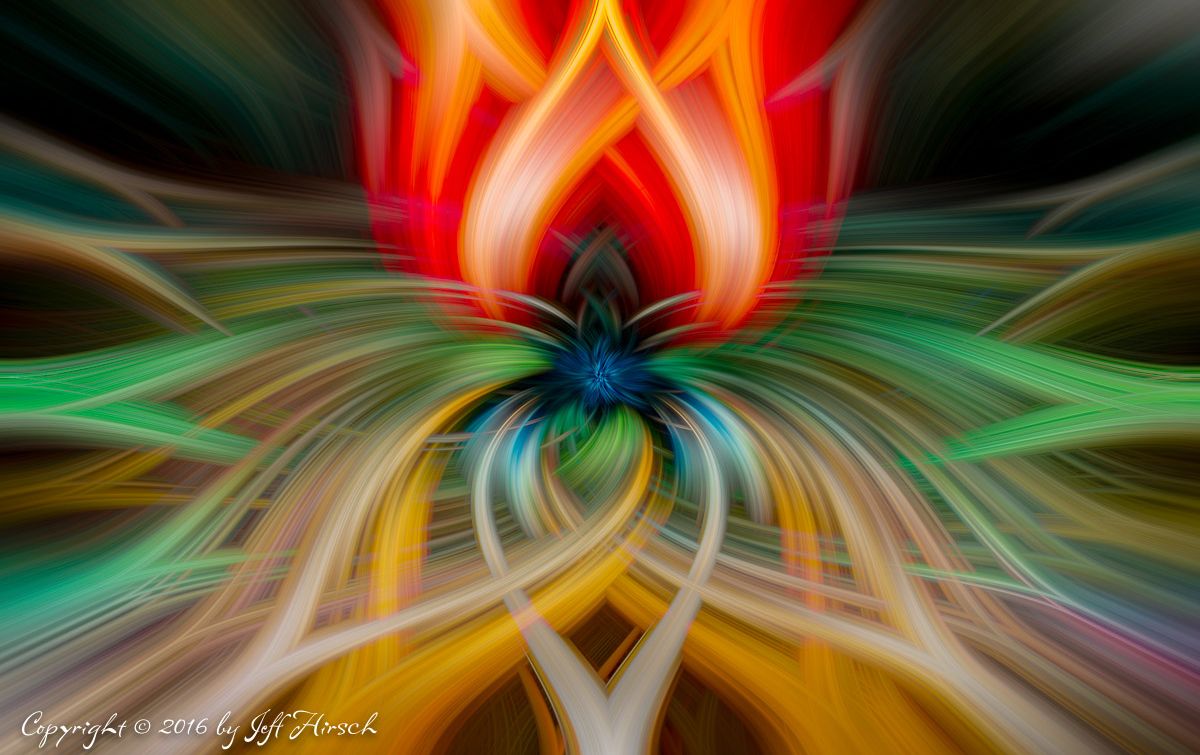 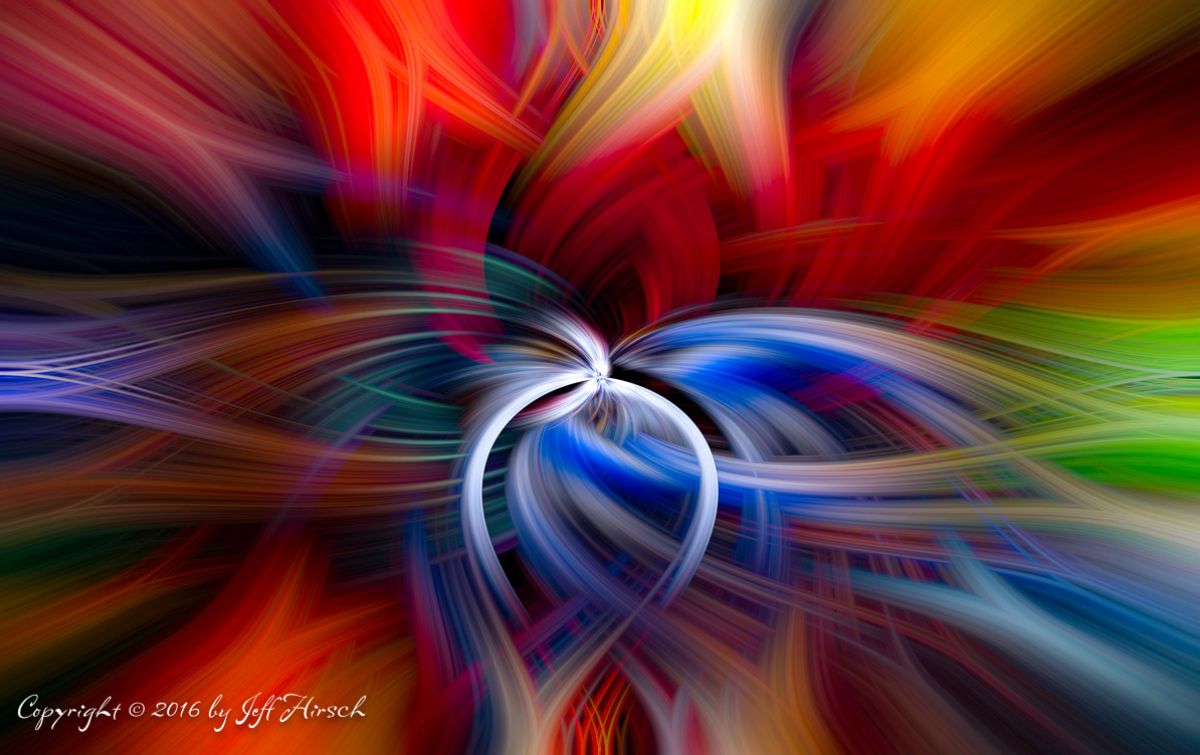 I participate in some wonderful digital art and photography forums where people share the creations they have made in-camera and in post-production. These groups are a constant source of inspiration to me and earlier this year I came across some gorgeous images that caught my eye. They looked like thin filaments or ribbons of semi transparent color, all swirled together beautifully in a circular mandala. There was something about the pattern, shape, and quality of the colored light in these images that I found enchanting. Of course that meant I had to know how the technique was accomplished!

Fortunately for me, one of the first images I saw belonged to a former student and fellow member of my local camera club named Marcy Pivin. She had learned the technique from somebody else and was more than happy to pass the steps along to me.

I had a great time trying out the process on various images to see which ones generated the best results and which ones came closest to capturing the particular quality of color and light that had attracted me in the first place. I fell down a rabbit hole for quite a few hours that afternoon and the result was a Photoshop Action I created to automate the entire process. (Free download via the link below!)

Here'a a breakdown of the steps that go into the process and some instructions on how use the Action. You can apply the process manually using the steps outlined below, or you can run the Photoshop Action that is provided at the end of the article.

Begin by choosing an image for this process. I've found that source images containing small areas of color throughout the frame tend to produce the most pleasing results. Note that this is a personal choice and you may find yourself attracted to images quite different from the ones I like. Experiment with different sources and see which ones you like the best.

1) The first step is to apply a Mezzotint filter to your source image. (Setting: Medium Lines) - This has the effect of scattering your source material horizontally and making the colors more saturated and intense.

2) The next step is to apply a Radial Blur filter. (Centered, Method: Zoom, Quality: Best) This will scatter your pixels in radial lines out from a center point. The more intense colors from the first step will be muted a bit by the process. (This is a good thing!)

3) You have some creative options at this point. This technique calls for the Radial Blur filter to be applied anywhere from one to five times before you move on to the next step. How many times you apply it will be completely a matter of taste. You'll probably need to experiment a bit to find out what you like best. For most images, I apply this Radial Blur filter twice, but I've done as few as one and as many as five. 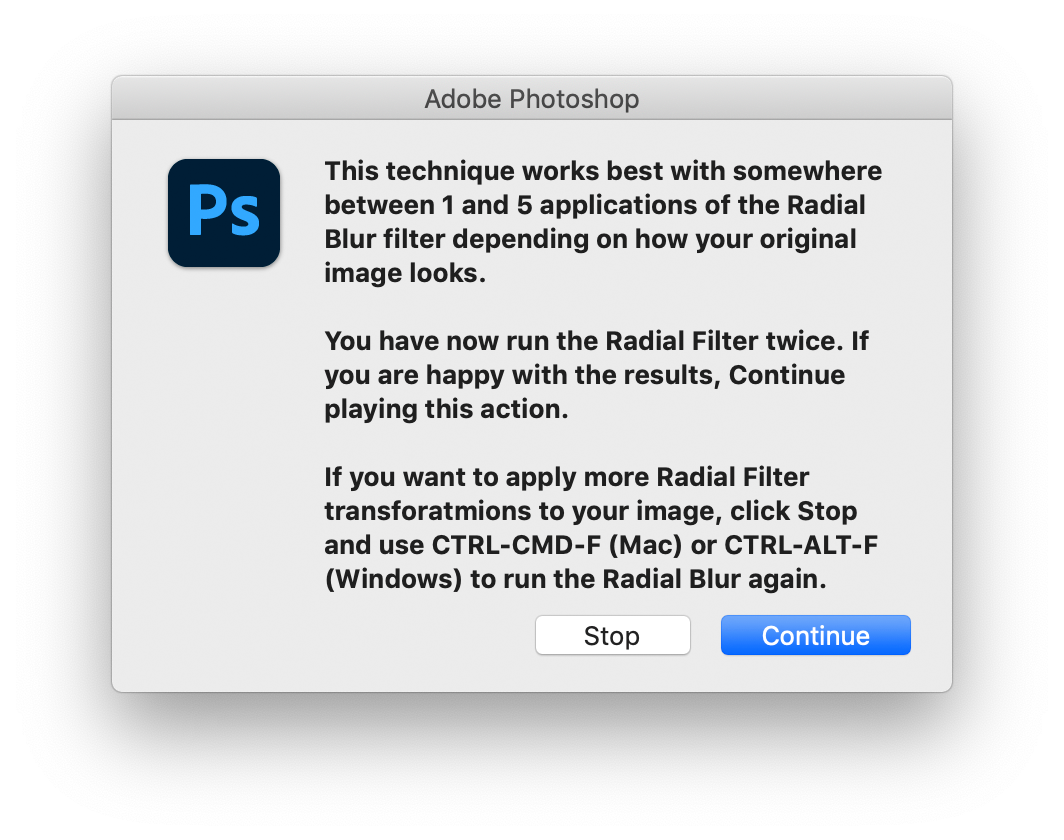 The action I built will pause after two applications of the Radial Blur and present you with a dialog box allowing you to either run more Radial Blurs, or proceed with the rest of the technique.

If you wish to apply the Radial Blur again, you can simply hit CTRL-CMD-F (Mac) or CTRL-ALT-F (Windows) on the keyboard to run the last filter again. Once you are happy with the results, you can resume playing the action and it will finish out the process for you.

4) The next step in the technique is to duplicate the Background layer which results in two identical copies stacked on top of each other.

5) The bottom layer is selected and has a Twirl filter applied to it with a rotational angle of 80. This takes the radial lines produced by the first few steps and twirls them around a central point.

6) The top layer is selected and has a Twirl filter applied to it with a rotational angle of -80. This takes the radial lines produced by the first few steps and twirls them in the opposite direction around that same central point.

7) Finally, change the Blending Mode of the top layer to "Lighten" so that the lightest pixels from each layer will show through. This creates the beauiful mandala effect when the two layers are blended.

Optional: When you've finished with the basic technique, you might also want to play around a bit with the resulting layers and how they are blended with each other. There is a second action I have included with the set that will take the results of the first action and flattern them into one layer, duiplcate and flip that layer 180 degrees and change it's Blend Mode to "Lighten". This optional after-effect creates yet another variation that I frequently found appealing. The last few images in the gallery were made using this extra step.

To run the Action: Open a source image. Select the action "2X Radial Swirl" from the Radial Swirl folder in the Actions palette. Click the play button.

Going back to their earliest products, Adobe has made a practice of hiding little "easter eggs" in their various programs. In the case of both Illustrator and Photoshop, the Adobe programming team has hidden a "Secret" About Box that replaces the normal splash page or About Box with a different more creative graphic, usually based on the code-name for that version of Photoshop. (Big Electric Cat, Strange Cargo, White Rabbit, etc.)

In the case of Photoshop CS6, the code-name was "Superstition" and here's a look at that secret about box. You can trigger display of the secret about box by holding down the Command (Mac) or Control (Windows) while selecting About Photoshop...